RSS (Really Simple Syndication) and Atom are both internet protocols designed to give you "feeds" from all sorts of different websites. This is very similar to the average social media feed you might see while scrolling down a social media app, except RSS/Atom need a "reader". A RSS reader just takes RSS/Atom links from websites, and then makes them easy to read and scroll through. Functionally, it's very similar to a blog, with each "post" having it's own seperate section with links, images, and the link. Here's an example of an RSS link, and an example of an atom link.

Now, if you try to go these links in your browser, chances are that you'll see a bunch of code you don't understand (in Firefox it looks a little different). If so, that's ok! RSS and Atom feeds use this code looking stuff (Extensible Markup Language(XML)) to make it look pretty inside your RSS reader, like shown below. 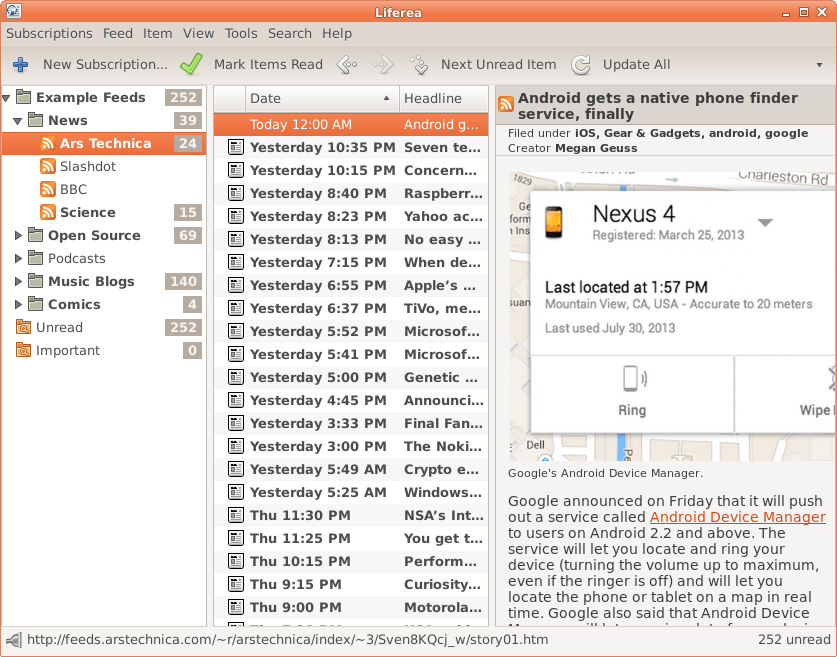 That's a little cramped, but on a wide screen display if gives you lots of options to access all sorts of feeds at once. Not just blogs, but podcasts, storefronts, and even social media, all without an account!

made it? Well gee, I'm glad you asked. In short, RSS has it's roots in the early days of web syndication (I'm talking mid-1990's) where companies like Apple wanted to create ways to gain lots of information about other websites fast and conveniently. This eventually led into making the Meta Content Framework (MCF), which was Apple's attempt at this. Eventually, the co-creator of XML (the markup language I talked about earlier) decided to extend MCF into an XML application, which became a standard adopted by the World Wide Web Consortium (W3C). Microsoft made something similar, eventually this led to a protocol called the Resource Description Framework (RDF), and then the first beta version of RSS (also called RDF Site Summary) was born. Eventually, some guy made Atom which was designed to be a better RSS and blah blah blah... As for who made it, it's hard to say. As for most programming projects (especially those that are open source), it's more of a community endeavor than anything else. It took the cooperation and adoption of tons of sites and companies to make it usuable in the first place, which is, ironically, something harder to find these days on the internet.

RSS and Atom were at their peak in the mid 2000's. Back then, it was everywhere. RSS was used to check on forums, newsites, comments on newsites and forums, blogs, YouTube (they actually still have RSS functionality to this day), literally everything had that RSS logo slapped on their site somewhere. Even web browsers straight up just integrated them into the browser itself. Even torrenting software integrated RSS to let you automatically download the newest items on the RSS feed. The list goes on.

Those sites did have RSS feeds at first, but eventually they removed support. Eventually, very popular readers like Shiira, FeedDemon, and Google Reader (extremely popular) was discontinued in 2013 due to RSS declining in popularity. Eventually it was removed from all major browsers, leaving us with Internet Explorer as the most popular one to keep RSS support. Big win. Well, sites that still promote RSS usually have that orange logo somewhere on their website, or just the logo. Actually, it's worth noting that most blog sites/older sites have RSS built-in to the website, even if it's not actively promoted. I can't tell you how many times I haven't seen RSS for a site I wanted to follow, only to press Ctrl+u, then press Ctrl+f and type in "rss", "xml", or "atom" and then find a link for an RSS URL (that's actually the method I use with the atom link example I used up above). Let me be clear; I do not like social media. I find it to be insanely manipulative and built to be addicting and take advantage of human vice. That may sound pretty dark to some of you, but after what I saw on Twitter last year, I can't think of it any other way. Everytime I see someone log onto to YouTube on their phone to watch just one video, then it always lead to another, and another, and another, and then thirty minutes have gone by.

However, I am aware of the talent, artistry, and wisdom that appears on some of those platforms. While I wish they were not on them, Many people who would not like to use social media actively would still like to keep up with their favorite personalities, artists, etc. This is where something like RSS comes into play.

RSS doesn't require an account to get started. It doesn't have some weird algorithm that decides what you get to see, and it's not gonna collect your personal data to some centralized server, because there is no centralized server you are reporting to, and no relevant data to give. While not intentionally built as such, it's something that respects your privacy and your desire to actually see and view what you want without ads or website bloat slowing down your browser or anything like that. It offers freedom. That's why you should use it. Sorry, that's not a part of the 5 W's! However, I have a guide that may solve that question perfectly for you...